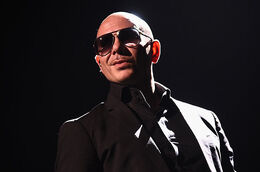 Pitbull is the latest artist to land a guest appearance in the upcoming second season of Empire, Fox announced at the Television Critics Association summer press tour Thursday.

The "Give Me Everything" singer and rapper (real name: Armando Christian Perez) will also perform “No Doubt About It” alongside Jussie Smollett, who plays singer and newly installed Empire Records head Jamal Lyon.

Pitbull joins a long and impressive list of musical talent set to appear, including Alicia Keys, Lenny Kravitz, Ne-Yo, Kelly Rowland and Ludacris. On Wednesday, co-creator Lee Daniels revealed that Mariah Carey will guest this season. However, the deal is not yet in place.

The second season of Empire premieres on Sept. 23 at 9 p.m. on Fox.

Retrieved from "https://empire.fandom.com/wiki/User_blog:TheBlueRogue/Pitbull_to_Guest_Star_and_Perform_in_Empire_Season_2?oldid=10196"
Community content is available under CC-BY-SA unless otherwise noted.